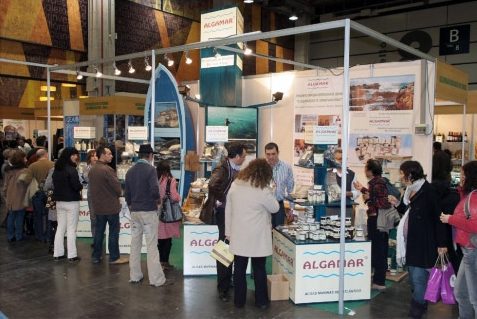 It has been 13 years since the 1997 edition of Biocultura in Madrid hosted the first stand featuring algae or “sea vegetables” in the history of ecological fairs in Spain. That was when Algamar was taking its first steps as a company specialising in algae as a foodstuff. In the next edition of the fair, a long-desired aspiration will be fulfilled: the wild Spanish algae harvested by hand on the Galician coasts have been awarded the European Union’s BIO endorsement and have been certified by the corresponding control authority, the Organic Regulatory Council of Galicia.

You will be able to see them in the Cristal Pavilion at the Casa de Campo from 4 – 7 November.

In 1997 Algamar had already applied to the Ministry and the Certification Authorities for algae to be recognised as an ecological product. However, it took 13 years for a specific regulation to be passed. The Galician firm also participated in its draughting. Algamar also contributed its proposals to the European Union in October 2008.

Algae have in fact been present for some time as bio food at benchmark organic fairs, ranging from Biocultura in Spain to Biofach in Germany. Organic farming products were also permitted to have algae among their ingredients. However, the algae themselves lacked the official “organic” seal, as the certification bodies in Europe only had competence over products from the land (agriculture, livestock and derivatives).

But what could be more organic than algae? They only need the ocean and the sun to grow. These sea vegetables, which grow by themselves in oceanic waters, were the first beings to appear on the planet, no less than 3,200 million years ago, when life did not yet exist on land. It took another 2.8 billion years for life to begin outside the sea. Algae were the “creators” of the chlorophyll function or photosynthesis based on sunlight, carbon dioxide from the air and oxygen from the water (1). More than 25,000 species of algae have been recorded in the world.

In Galicia, up to 60 species with interesting properties have been registered. They are listed in the scientific publications of the Galician Regional Government (2). In their natural state their sizes vary considerably from a few centimetres to several metres. They form dense forests of different colours in what is recognised as the largest underwater garden in southern Europe.

The new European Regulation stipulates that for wild algae to be certified, an initial estimate of the biomass must be undertaken; harvesting must be such that the amounts collected do not have a significant impact on the state of the aquatic environment; measures must be taken to ensure that the algae regenerate; and minimum sizes and reproduction cycles must be taken into account. Algae harvesters must also demonstrate that they practice sustainable management of the harvesting areas.

The EC regulation also includes “cultivated” algae. Many Asian producers find themselves in this phase due to the high domestic and international demand for their products. This system was trialled in Galicia several years ago in coordination with the Universities of Santiago and La Coruña and achieved very good results. It could be the next stage in algae production, when consumer demand and the availability of renewable algae resources make it advisable. 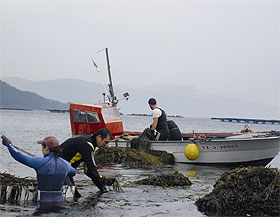 The following algae are currently recognised and certified in Galicia as organic food:

They all grow wild on the Atlantic coast.

Finally, the words of one of the country’s best known algae experts, Professor Julia López, head of Nutrition and Bromatology at the Faculty of Pharmacy of the University of Santiago, have been endorsed. She concluded her research by saying, “These algae meet the characteristics expected of a healthy foodstuff”. (3)

This organic certification, in addition to representing a historical milestone in the algae/sea vegetable market, is yet another recognition of the pioneering and environmentally respectful work with renewable resources that received the Biodiversity Award last year.

ALGAMAR 2018 ( No part of this website (texts or photographs) may be reproduced without the express written permission of Algamar. )